In tonight's episode, Gunti orders Swati to ask Indresh to return home. Swati follows her orders even though she doesn't want to. 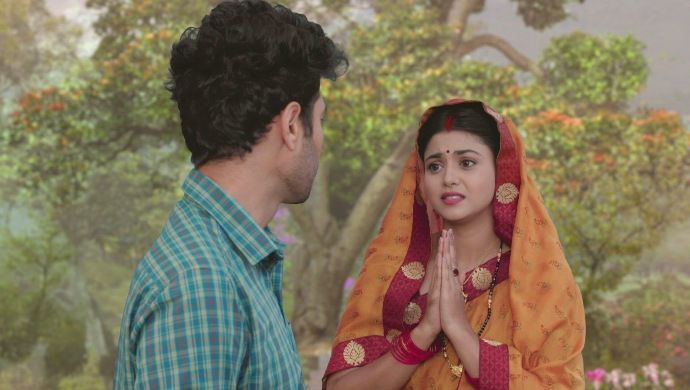 In tonight’s episode of Santoshi Maa Sunayein Vrat Kathayein, we see that Rinki shows her concern towards her mother and tells her that if Swati had not come to save her, it would have created a big problem. However, Gunti tells her that she knows Swati’s weaknesses and knows very well how to take advantage of her docile behaviour.

Later, Swati tries to convince Indresh, but the latter tells her to stay away from him. Swati tells Indresh that it is totally alright if he doesn’t want to talk to her, but he still can have some tea which she has made with lot of love. Indresh can’t hold a grudge for long and finally asks Swati to give him his tea. As soon as, Swati comes to know that she has managed to calm down Indresh’s anger, she asks him if she should keep the vrat of Vata Savitri. Indresh gives him the permission without any second thoughts. But Swati conveys that she would love to celebrate this with entire family. Indresh gathers all the laborers in the garden and asks them if they could be his and Swati’s family. The labourers feel delighted and they readily accept to be the couple’s family. Swati gets emotional by their gestures.

After some time, one of the labourers informs Singhasan Singh about Indresh’s doings. This makes Singhasan Singh furious and he starts blaming Gunti for giving birth to an evil like Indresh. Gunti helplessly tries to convince Singhasan Singh, but the latter continues to humiliate her by calling her a disgrace to his family. Right at that moment, she sees Swati coming towards their house. Gunti furiously asks Swati why she is here. Swati replies that she is the daughter-in-law of this family and no one can stop her from entering the house.

Later, Indresh calls Swati to know if everything is fine. Gunti grabs Swati’s phone and orders her to call Indresh back. Swati unwillingly follows her orders and asks Indresh to return for the sake of their love.

In the upcoming episode of Santoshi Maa Sunayein Vrat Kathayein, we will see Swati hope for Indresh to return and pray for the same. On the other hand, Indresh is determined that no matter what, he will never return his home. At night, when Swati is deep asleep, Rinky and Lovely try to kill Swati by suffocating her with a pillow.

Here Are 6 Types Of Holi Celebrated Across India: The Favourite Festival Of Shri…

Watch the episodes of Raat Ka Khel Saara, a new horror show on And TV now streaming on ZEE5.