The first episode of Starry Nights Gen Y is out now on ZEE5. The guests of the episode were none other than Sara Ali Khan and producer Dinesh Vijayan! 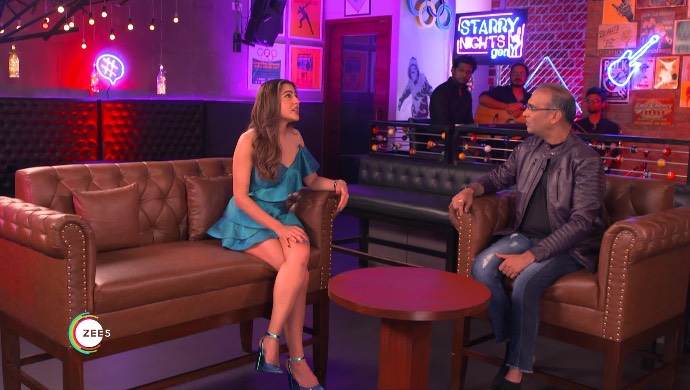 Komal Nahta’s talk show, Starry Nights Gen Y, is now live on Zee5. The host started this season’s first episode with guest Sara Ali Khan. Sara has become the favourite of many in literally no time. Her perspective and charming mannerisms have set her apart as one of the freshest faces in the industry.

Sara revealed previously-unknown facts and quirks about her childhood on the show. Komal asked Sara about her choice of education, referring to the fact that the actress has a degree in political science and history from Columbia University, which she finished in three years instead of four. Sara replied gracefully that education is very important and personal to her. It helps her to understand things in a better way. And even now, she is a student and keeps learning or unlearning certain things.

While talking to Komal, Sara revealed that she was very a naughty child and she continues to be so even now. Sara also shared some things related to her parents. Komal and Sara played a few games where Sara was asked not to answer diplomatically. Komal asked Sara to tell whom would she block, tag, stalk, and follow among Ananya Pandey, Kartik Aryan, Ishan Khattar, and Jhanvi Kapoor. She replied that she wouldn’t block any one of them, but instead she would tag Kartik Aryan, stalk Ananya Pandey, and follow Ishan and Jhanvi Kapoor.

Later, the show surprised Sara with a little present: a video message from Kareena Kapoor Khan. In the video, Kareena said some beautiful things about Sara and her childhood. Indeed, the affection between them was obviously quite strong. Sara admitted that she loved Kareena and the way she works and that she would like to learn the quality of professionalism from her.

Komal invited Dinesh Vijayan, the producer of Love Aaj Kal 2. Komal asked Dinesh about his journey in Bollywood from being a bank employee. Dinesh said that the industry doesn’t value writers enough and writers are the future. He said that the industry must value them for their dedication because writing is the soul of any film.

Komal wrapped up the interview by giving them both tokens of her appreciation.

Watch more episodes of Starry Nights only on ZEE5

Watch state of siege:26/11 streaming only on ZEE5 Original

These Informative Shows On ZEE5 Will Keep Your Child Busy And Creative Under #Lockdown!