Exclusive! Saumya Tandon Talks About Her First Day On The Sets Of Bhabi Ji Post Her Leave

"The first day of shooting for Bhabi Ji Ghar Par Hain was a bit of a task as I was back with the baby and he is too young." Saumya reveals in a chat. 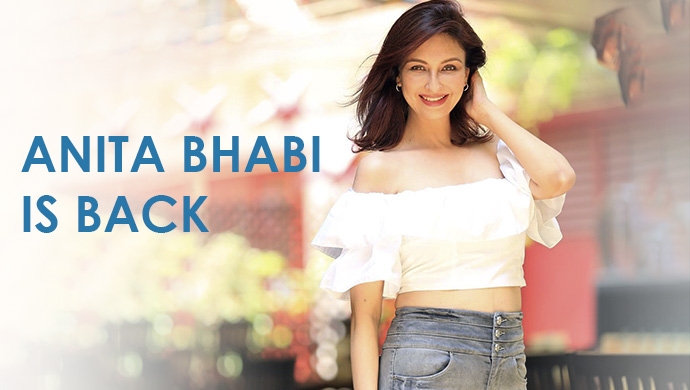 Saumya Tandon aka everyone’s favourite Anita Bhabi has finally made a comeback on the show. The fans of Bhabi Ji Ghar Par Hain were waiting for her return as they missed the ‘teekhi nauk jhok between Anita and Vibhuti, as well as the fun chemistry between Manmohan and Anita. After a lot of speculations and questions about the actress leaving the show, she decided to drop a hint to all her fans on social media, saying she is going to give them a surprise soon.

Everyone was excited about this announcement and on 13th of May, she went live on her social media page and officially announced her return on the show. In case you missed it, take a look at the video shared by the actress on her social media.

In an exclusive interview with us, the actress shared her experience of her first day at the shoot. “After so many speculations, I have joined back Bhabi Ji finally. I used to get a lot of well wishes and questions about my return on the show on my social media. The love and affection that the fans have showered on me were very overwhelming, so, I decided that when I will join, I will directly communicate it with my fans and tell them that I am back. I would also like to say thank you so much for all the love and affection that they have shown for me”.

We then asked her about how she feels after coming back on the sets of Bhabi Ji Ghar Par Hain she replied, “The first day of shooting for Bhabi Ji was a bit of a task as I was back with the baby (Miraan Tandon Singh) and he is too young. When I went up to shoot, I saw my old unit and it was like meeting my old family again. There were many things that had happened in each other’s lives like Malkhan and Tilu got married, and some of the team members had babies. There were so many things and we hardly got any time because we had to shoot a lot, but we still managed to exchange a couple of personal information. It was really endearing as we were seeing their wedding pictures and they were seeing my baby’s pictures. It was a very beautiful day but tough also because I had to shoot back to back scenes so it was quite a rush. My producers were absolutely lovely and they made it comfortable for me. So all in all, it was a very adventurous first day and now when I am shooting for Bhabi Ji after a lot of speculations, it is going be even adventurous ride further and I hope to create the same magic and fun scenes that we had created as a team before.”

We then asked the actress about returning to the show early and the actress said “I feel I am a bit lucky because I have such lovely producers to make it easy for me and she herself is a mother which is why she very well understands. Personally, I would recommend to every woman to take 6 months breaks and be at home to take care of your baby.” Since now she has a lot of duties to be done as a mother as well as an actress, we asked her how is she planning to cope with the schedule? “I have personally made some arrangements for my baby like I had my own vanity van so I could carry the baby along with me. My producers said that they will make it a little comfortable for me by shooting near my house for the next two months. And also from my side, I have a nanny and I decided to take the baby in a special van with me so if there is a special need from the baby or I have to feed the baby then I can go to the van and feed him. I have kept a nanny who will be with me on the sets to take care of the baby as he is too young.

We are well aware of the chemistry between the actors so we asked her, how was it to meet her co-stars after a long time? “I did not shoot with everybody yesterday but I had one scene with Aasifji who plays my husband Vibhuti, and we both were very happy to see each other. The first scene of the shoot was a fighting scene and I asked him jokingly that how is it to have your fighting partner back? He replied saying yea I missed the fighting”.

“We hope to have some husband-wife fighting and camaraderie again. I feel that the Jodi of Anita and Vibhuti is very real and interesting because it is unlike other TV couples which are very lovey-dovey and dramatic. This is a very nice, fun chemistry that we portray. About Rohitashji I haven’t shot with Rohitji, But I am really looking forward to shooting with him because he has been in touch with me on the messages all this while and he keeps on telling me that I miss getting scolded by you so and I tell him that ok I am coming soon to scold you again. Though I met Tika Malkhan and Tilu on the sets because they had a separate scene. I feel all my co-actors are lovely and my director and my writer all of them are supporting. We have a kind of camaraderie and chemistry with each other and I hope that we are going to have some fun scenes again.”

We are eagerly waiting for the episode to watch this brilliant actress with her sassy and fun dialogues. For more entertainment stay tuned.

What are your thoughts on this? Let us know in the comments section below.

Exclusive Behind-The-Scenes Photos From The Streets of Badnaam Gali, A ZEE5 Original Film