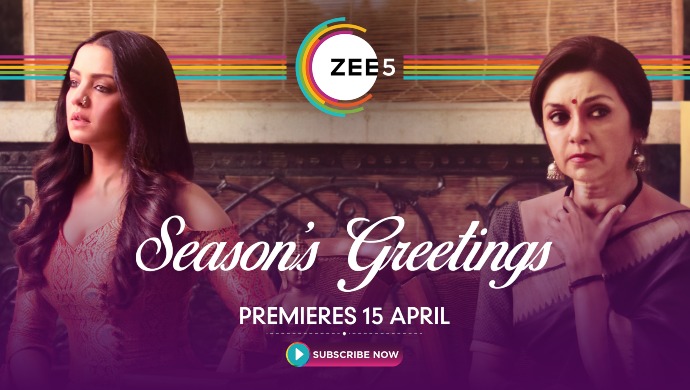 The word ‘freedom’ has a whole new meaning since the landmark judgement by the Indian Supreme Court for the LGBTQIA+ community on 6 September 2018. Amongst various forms of celebrating the decriminalising historic verdict, director Ram Kamal Mukherjee chose to pay a tribute to Bengal’s eminent filmmaker and same-sex rights activist, Rituparno Ghosh! The first-ever Indian film to collaborate with the United Nations under ‘Free and Equal’, Season’s Greetings stars Celina Jailty Haag, Lillete Dubey, Azhar Khan, and Shree Ghatak, India’s first transgender actor. Read on for our review!

The very first trait to catch your eye is the beautiful aesthetic of the film. Every minute detail has been paid attention to. That was the signature of Rituparno Ghosh’s filmmaking, which inspired Ram Kamal Mukherjee, of course! Despite being visually mesmerising, it does not take away from the core of LGBTQIA+ rights. With Romita (Celina Jaitly) and Usmaan’s (Azhar Khan) conversation, you take baby steps into the life of Suchitra (Lillete Dubey), Romi’s single mother.

By touching over the life and childhood of Chapala (Shree Ghatak), the film sends out a message to not intrude much or ask too many questions, but just accept people the way they are. Young Chapala uncannily resembles Rituparno in the scene where he sneaks away with Romi’s ghungroo and dances to the beats of his own heart. Born as a boy, loving to wear make-up and jewellery, Chapala has gone under the knife to change her biological sex. Now, she works as a house-help to Suchitra, who lives alone.

Along with gay rights, the film also encourages inter-religious relationship/marriage through Romita and Usmaan who are a Bengali Hindu and Muslim respectively. They respect each other’s beliefs and culture even if his family is indecisive. Smashing even gender roles, Usmaan cooks in the house and bonds over it with Suchitra. The scene at the dinner table is where the conflict of the letter arises. Romi’s father had been away for 15 long years and someone had left a letter titled “season’s greetings” for Suchitra, which Romi finds.

On confronting Suchitra, the past is dug up layer after layer. Expressing that Suchitra’s husband, Rituparno, could never give her the love that she needed, she would have divorced him if it wasn’t for her only daughter Romi. But now, at this age, she has found new love and freedom in a relationship that doesn’t conform to the norms of society. Amid the voice of the beautifully written Urdu letter and Rabindranath Tagore’s spellbinding melody enters Suchitra’s partner!

To unveil the story on 15 April 2020, watch the film Season’s Greetings: A Tribute to Rituparno Ghosh, streaming at ZEE5 Short Film Festival!

You can get all the live updates on Coronavirus on ZEE5 News section, streaming now.