Shiv Pandit Of The Chargesheet: Innocent Or Guilty: I Spent 53 Days Getting A Moustache

Shiv Pandit who plays the role of a popular sportsperson from the 80s, in the upcoming ZEE5 original, tells us how he prepared for this role. 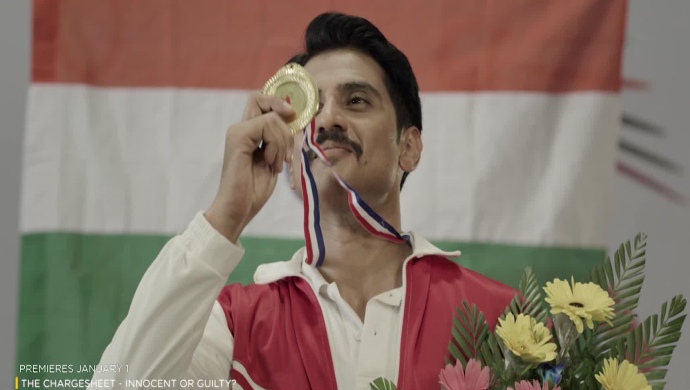 Shiv Pandit plays the role of a famous sportsperson in the show ‘The Chargesheet: Innocent Or Guilty‘, releasing on  Jan 1, 2020. He stars alongside Tridha Choudhury and Arunoday Singh in this sports-themed drama and murder mystery. He talks to us about preparing for the role while shooting for Shershaah in Kargil. He also opens up about his family’s reaction to the recently released trailer of the upcoming show.

Watch the trailer for ‘The Chargesheet: Innocent or Guilty’ here.

1. What drew you to play the role of Shiraz Malik in ‘The Chargesheet: Innocent or Guilty’?

Honestly, I had no idea about the character when I first picked the role. I was shooting in Kargil and Ashok Pandit Sir called me up saying he has a role for me. My initial reaction was to turn down the role, because I would not get enough time to wrap up the shoot in Kargil. But he insisted on it and it’s always inspiring when the director shows so much faith in you. Then when I read about the character, I wanted to play it because he is extremely layered. For example, he loves his wife in public but it not a nice person to her in private. Tridha and I both play sports-persons, but my character is shown as the better performer and he keeps belittling her.

2. Did you do anything specific to prepare for the role of a sportsperson?

Since childhood I have been playing multiple sports because I was in a boarding school. I did boxing and almost broke my nose once. I’ve played hockey, football, squash, badminton almost every sport. I may not have excelled in all of them, but I was into sports. Plus, I was already in shape because I was shooting a war movie in Kargil. Lastly, I didn’t focus too much on the sport because that is only 10 per cent of the show. It is more about my character’s personal life.

3. What was the reaction to the trailer?

So when the trailer came out everyone was intrigued by the show. They usually give me good feedback because they don’t want to say it is actually bad. For this one, I just knew they were being honest.

I usually never sport a moustache and my hair growth is really slow. It took me 53 days to sport a proper moustache. That was a major part of the look which we really researched. In the ’80s, most men had either a beard or a mustached look. We couldn’t give him a beard and long hair because he is a sportsman. I think the look of the character feels like he’s from the ’80s. Fifty percent of the job is done when you get the look right, the rest is entirely the performance.

5. You’ve picked up some tough and controversial roles in your career. Which of those would you call your toughest?

Toughest, I don’t know. But I did play a controversial role of a homosexual man in another movie. However, I don’t take up a project thinking it will be tough or controversial. I see the material, and if I believe in it then I will take up the role, if I don’t believe in it I won’t. Audiences these days are very obsetvant. They have all kinds of entertainment on their remote. If you are even a little amiss with your performance they will switch. So I don’t think about a role being difficult or easy. The toughness for me is not in the character but I don’t like the cold weather so when I have to shoot in really cold conditions I find it challenging.

6. You are married in real life and the show is based on infidelity in a marriage. What are your opinions on the right way of dealing with such a situation?

Are you suggesting that my wife is cheating on me? I’m kidding. I feel like that changes from person to person. It’s up to the couple to decide how they want to take things forward. But the main thing is to have a conversation about it instead of dealing with it in more harmful ways.

Watch him play the complicated character, Shiraz Malik, in Chargesheet: Innocent Or Guilty streaming since 1st of January 2020.