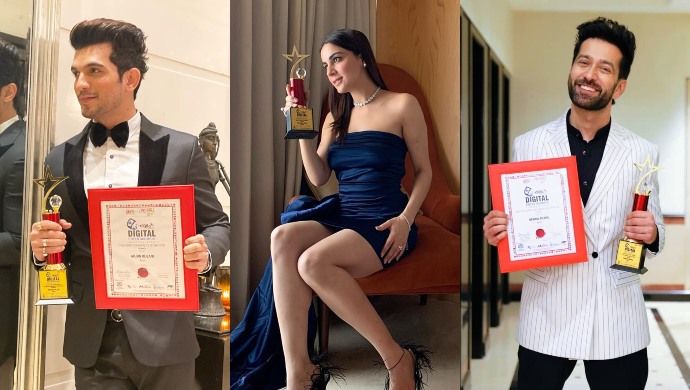 And once again, your favourite television stars came home with three trophies at the Digital Entertainment Awards held on 14 February 2020, the same day ZEE5 celebrated its 2nd anniversary with #2xTheLove. Shraddha Arya, Arjun Bijlani and Nakuul Mehta won as TV best television actors and personalities among all the other nominations. The three of them took to social media and shared their proud moment with the audiences.

Popular Zee TV beti Shraddha Arya, who plays the character of Dr. Preeta Arora on Kundali Bhagya, bagged the most coveted award of ‘Best Television Actress’. In an Instagram post, she expressed her gratitude to World Digital Awards as well as Digital Entertainment Wards for this grand honour. The achievement became even more special when she accepted the award on behalf of Kundali Bhagya, the show that is continuously airing since 12 July 2017. It is a spin-off of another popular Zee TV show Kumkum Bhagya and has completed almost 700 episodes so far!

The very charming actor who you have seen as Sumer Singh Dhillon in the ZEE5 Original romantic series Never Kiss Your Best Friend, Nakuul Mehta also tasted victory with the ‘Best Television Actor’ award at the Digital Entertainment Awards. He has worked in TV shows like Ishqbaaz (2019) and Pyaar Ka Dard Hai Meetha Meetha (2014). He took to Instagram and announces the achievement by writing, “First of 2020”. The actor dedicated the award to his parents Shail Mehta and Pratap Singh Mehta and asked them to make some space in their living room for it!

Next up, the pride of upcoming ZEE5 Original series State of Siege: 26/11, Arjun Bijali took the cake by winning ‘Television Personality of the Year 2019’. His body of work ranges from playing lead roles in Ishq Mein Marjawan and Naagin (2015). He has also been a part of dance reality shows like Dance Deewane as a host and Jhalak Dikhla Jaa Season 9 as a contestant. On Instagram, he thanked Digital Entertainment Awards and Global Digital Marketing Awards for recognizing his talent.

If you want to watch more of their amazing performances, watch Kundali Bhagya and Never Kiss Your Best Friend streaming on ZEE5 now! Also, stay tuned for more updates on State of Siege: 26/11.

In Pics: The Best Of TV, Film And Web Stars At ZEE5 #2XTheLove Anniversary Celebrations