Angoori Bhabi of Bhabi Ji Ghar Par Hain nails the Bottle Cap challenge in a HATKE style. Take a look at the Bollywood celebs who tried this challenge 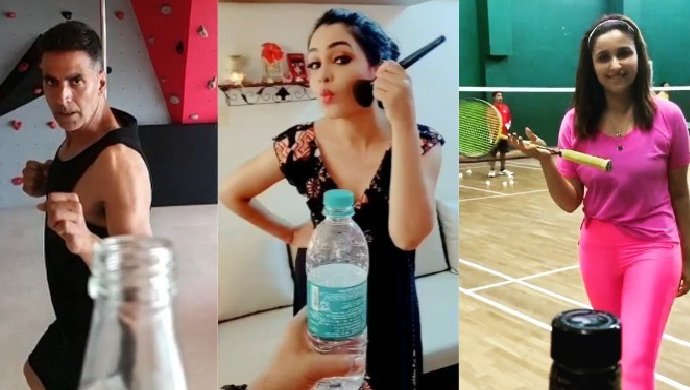 We all love following the trends and challenges on social media, be it a ‘Ice Bucket’ challenge or Bottle Flip one. Recently Hollywood actor and Fast and Furious fame Jason Statham uploaded his video in which he is seen opening the cap of a bottle with his foot. But just to give you a little tip, it wasn’t started by him as it was an MMA fighter from Kazakhstan who initiated this tough challenge.

Take a look at Jason’s incredible challenge that went viral all over the world:

#bottlecapchallenge #challengeaccepted @erlsn.acr This thing landed on my head from @johnmayer but will quickly go to a couple of fellas we’ve seen do push ups badly. All yours @guyritchie and @jmoontasri

If you want to stand out in the crowd then you need to do something different and our favourite actress Shubhangi Atre aka Angoori Bhabi swears by this thought. Watch how Angoori Bhabi nailed this challenge in the video below:

Lol! must be your first reaction after watching this video. The challenge was to open the cap without touching it with hands but they did not mention about not using a brush, did they? Even other Bollywood actors and actresses tried out this challenge take a look:

Actress Parineeti Chopra had her own version of this challenge and we must say that this is quite interesting.

If you think the party is over then your mistaken our friend. Take a look at Kunal Khemmu‘s version of the challenge.

Hailing the women power, Sushmita Sen took the challenge seriously and uploaded her version on her social media. And this time we are serious.

When it’s about comedy, how can we miss the king of comedy, Govinda aka our favourite Chichi?

We Indians love to take everything to another level, and Tiger Shroff’s this video proves the same.

Can you beat that?

The best is yet to come. Khiladi of Bollywood aka Akshay Kumar was amongst the first stars to take on the challenge.

I couldn't resist 😉 #BottleCapChallenge Inspired by my action idol @JasonStatham, I will repost/retweet the Best I see, come on Guys and Girls get your Bottle out and your Legs in the Air, Let's Do This 💪🏽 #FitIndia #WednesdayMotivation

Have you tried the challenge yet? If yes, then share your version of the #BottleCapChallenge.

Watch Haseena Parkar The Story Of Aappa Of The Underworld