In an exclusive interview with ZEE5, &TV show's Anjani Devi aka Sneha Wagh spilt some beans about how much mischief she and Ekagrah make on the set! 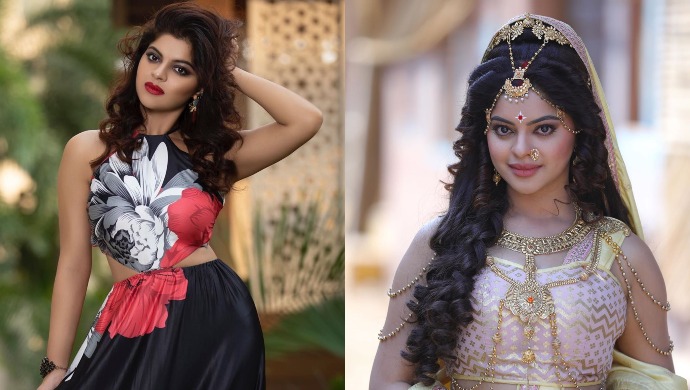 On 11 March 2020, Ekagrah Dwivedi aka Maruti from Kahat Hanuman Jai Shri Ram celebrated his 5th birthday with the entire cast and crew, on the set in Naigaon, Mumbai. Sneha Wagh, who plays his mother Anjani Devi on the show, helped him cut the giant laddoo birthday cake! Aired on 7 January 2020, the &TV portrays Anjani as an apsara turned vaanari, who marries King Kesari. Sneha Wagh was excited to share about the occasion as well as her role with the media. Read the exclusive interview with ZEE5 here:

1. How do you feel about celebrating Ekagrah Dwivedi’s birthday on the set for the first time?

Ekagrah is a very young kid and the most exciting thing for him was that his birthday is being celebrated on the set first of all! Initially, he was scared that if we are shooting, his birthday would not be celebrated. So seeing him happy finally made us and especially me very happy!

2. How is your experience of playing Maruti aka Ekagrah’s mother on the show every day?

Oh, we have a lot of fun on the set! Playing Ekagrah’s mother is like an adrenaline rush because he is such a naughty kid. I’m also very mischievous and we share each other’s energies. It’s a different vibe altogether! I don’t get the feeling of being Ekagrah’s mother because I myself become a kid with them. But yes, I do feel responsible for and protective of him always!

3. How do you prepare for Anjani Devi’s role in terms of dialogues, emotions and getting into the character?

Initially, getting into the character was not very easy for me because I’m a hyper person. I’m very real and vocal about my emotions. I’m a today’s girl and Anjani is the epitome of extreme femininity. She is the perfect woman! So obviously, I had to calm myself first and yoga helped me to do that. And I have to work on my vocabulary because the Hindi we speak on the show is very difficult!

4. What goes on in your mind when you’re getting your make-up, hair and jewellery ready for Anjani?

I love getting ready for Anjani! Somewhere down the line, all women love getting dressed up. So, it’s like a natural thing for me. It’s fun. I don’t feel the process to be tedious because then I won’t even be able to shoot for the whole day!

The best part about being on the set is doing scenes with Maruti. We have such cute and lovely scenes together, portraying the mother-son bond. There’s so much of mischief in the scenes that we do. Anjani is never irritated by Maruti and is always in awe of him. She is enamoured by Maruti’s cuteness and innocence.

6. And how do you switch from a cute and mischievous Anjani to the serious and fearful Anjani?

That comes naturally because all of us women have a feeling of motherhood within them. If you look at elder sisters also, they are very caring towards their younger siblings. So, I think that is inherent in me too!

7. What do you think about Ekagrah Dwivedi’s performance as a child actor?

He is very good! His innocence is loved by everyone. He loves food and whenever we do scenes related to food, he gives amazing expressions! I have a lot of fun watching him. Once when he saw jalebis on the set, he made such cute face faces, sticking his tongue out!

8. Who is your favourite co-actor on the set?

Firstly, my character introduction wasn’t normal. I’m a vaanari, so it was all monkey types! I was jumping from branch to the other and saving a baby bird. That is one memory I can never forget! I don’t think any heroine must have got such an introduction.
The second moment would be that, initially, when we were shooting, Maruti had to pee. He didn’t say anything but just got down and ran very cutely. All of us were laughing so hard, confused about what’s going on!
And the third one would be this 5th birthday of Ekagrah!

10. What are the best qualities of Anjani Devi that you derive into your personal life?

I want her calmness to come inside me! Some times, this quality is very important. I wish I was as composed and controlled as Anjani. I’m very hyper and naughty actually!

11. Does Sneha Wagh translate into Anjani while giving shots sometimes?

Yes, it does happen sometimes. Then those shots are cut off from the scenes (laughs)! I speak so fast and Anjani has to speak very politely. Her words carry so much weight. Sometimes, I blabber rapidly and my director cuts the shot and says “Sneha, calm down, speak slowly, breathe!”

12. How has the overall journey from Marathi theatre to independent films to now TV been?

My journey has been fantastic because I don’t think I have repeated any of my characters. They have been poles apart from each other. In Chandragupta Maurya, Veera, Mere Sai, Maharaja Ranjeet Singh, Jyoti and other shows, my roles have been abstractly different from each other! I’ve had fun exploring a lot of human emotions. And this is my first mythological series also. I don’t think any other genre is left!

PLAY On ZEE5: Get Ready To Make ZEE5 Your Destination For Entertainment And Gaming