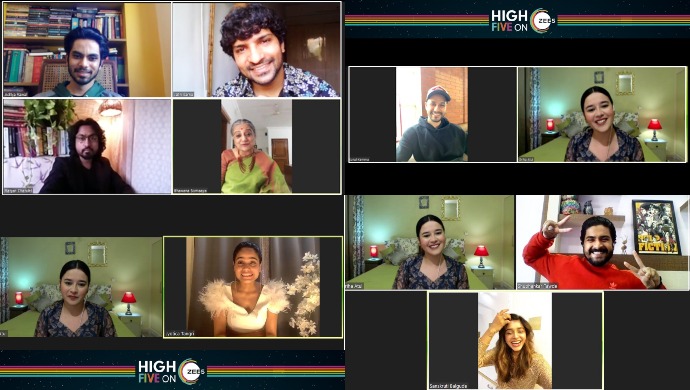 On 15 May 2020, India’s largest OTT platform created history by organising an entirely digital award ceremony for the second time. High Five on ZEE5 Awards was held on a Live Webinar, attended by your favourite stars and winners of ‘Most Viewed Content’ across movies, original series, music video, and so on. The previous edition took place in the month of April, which was hosted by Aparna Acharekar – Programming Head (ZEE5). The fifth edition, in the month of May, was hosted by film journalist and coffee fiend, Griha Atul. A film critic, columnist, and author of 15 books, Bhawana Somaaya had a Fireside Chat with the actors and directors. #HighFiveOnZEE5 is the only awards that honour digital content of its platform and judges on the criteria of most viewed by the audience.

The video event started with Griha Atul displaying the nominees of the ‘Most-Watched Original Series’ (Continuing), i.e., in the last six months, which were The Final Call, Abhay, and Poison. And the award was bagged by the ZEE5 Original series Abhay. Its second season is announced to be coming soon. Bhawana Somaaya played a fun game of rapid-fire with the lead actor Kunal Kemmu. On being asked who would he give more importance between Soha (wife) and Inaaya (daughter), he replied, “I think it is mutually decided by me and Soha that Inaaya is the center of attention from the time she’s born!” Then, he chose ‘workout’ over ‘over’ as his priority among the two.

Griha Atul welcomed Aditya Rawal (lead actor), Ranjan Chandel (director), and Jatin Sarna (supporting actor) from Bamfaad. This ZEE5 Original film bagged the ‘Most-Watched Movie’ among the other two nominees being Commando 3 and Hacked. The cast and crew of Bamfaad had a great time chatting with the host who asked them to some of the exciting and bamfaad love stories from their lives. Jatin Sarna, who essays Zahid, shared that he used to like a girl during school. Once, when she couldn’t find him around, she inquired with his grandmother and she learnt that Jatin is in love! Aditya, playing Nasir, said that his father, Paresh Rawal, is more hyper than his mother.

.@jatinsarna taking us back to his school days with a cute love story, which we're pretty sure, almost all of us have experienced! In conversation with @GrihaAtul . #HighFiveOnZEE5 @adityarawal1 @ranjanchandel pic.twitter.com/1i68jnZld2

In the ‘Most-Watched Original Series – Regional (April) category, Chadarangangam (Telugu) won the award amidst the other nominations of G.O.D (Telugu) and Judgement Day (Bengali). Director Vishnu Manchu graced the digital event and answered questions by Bhawana Somaaya. Vishnu shared anecdotes from the making of the series and of the culture in the South Indian industry. Then, Kaale Dhande (Marathi) won the ‘Most-Watched Original Series – Regional (Continuing). Actors Sanskruti Balgude and Shubhankar Tawade played a game of Two Truths And A Lie with Griha Atul. Both of them posed quirkily for the screenshot picture at the end of their fun segment.

Last but not the least, singer Jyotica Tangri bagged the award for the ‘Most-Watched Music Video’, which is Kangna Vilayati from the upcoming movie Virgin Bhanupriya. Griha Atul praised and congratulated her for the achievement. While taking questions from viewers, Jessica David asked, “How is your riyaaz going during the lockdown, and how do you keep your music alive?” To which, Jyotica replied, “I have finally got the time to practice playing the violin. I’m also trying to compose and record some new songs at home. Honestly, most of the time goes into household chores, but yes I do make it a point to stay connected with my music”. She ended the event with a happy song.

On 22 May 2020, the biggest direct-to-digital blockbuster film Ghoomketu is all set to premiere on ZEE5. Directed by Pushpendra Nath Misra, it stars Nawazuddin Siddiqui, Anurag Kashyap, Ragini Khanna, and others. #StayHomeToSuperEntertainment and for more amazing content, keep binge-watching ZEE5.

Priya Banerjee On her Character In Baarish: Shreya Is Quite Like Kareena's Poo In KKKG