Sunny Leone became the first actor to star in her own biopic series as she played herself in ZEE5 Original Karenjit Kaur: The Untold Story. 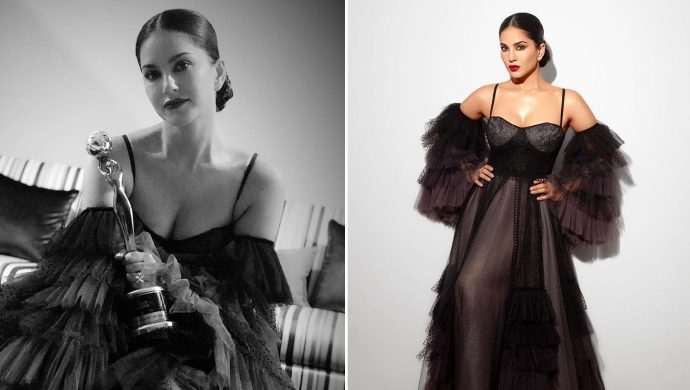 Thursday just got better for Sunny Leone fans! The Indo-Canadian celebrity won the OTT Icon Of The Year Award at Gold Awards 2019. Sunny became the first actor to star in her own life drama, a ZEE5 Original web series Karenjit Kaur: The Untold Story. Dressed in an all-black look, colour-coordinating with her husband Daniel Weber, Sunny stunned in a gorgeous gown by Supriya Munjal. She even thanked Gold Awards for the honour, in an Instagram post.

Thanks @goldawardstv for Icon of the Year! Photo credit- @dirrty99

As shown in her biopic series, ZEE5 original Karenjit Kaur: The Untold Story of Sunny Leone, Sunny was born to middle-class Punjabi Sikh parents, as Karenjit Kaur Vohra. She was a uni-browed school going desi girl bullied in school, and her father’s unemployment led them to move to California. She took up modelling to make extra money but soon found herself foraying into the world of adult entertainment. Albeit it was a decision made whilst she was wide awake, the world came crashing when her parents found about the actress being a Penthouse Pet.

2. A die-hard Punjabi that she is, Sunny is a big-time foodie. Did you know she absolutely loves Delhi’s street food including gol-gappas and dahi chaat being her favourites? While her cheat meal consists of chocolates and parathas but her favourite remains steamed lime fish with sliced chillies! Oh, and she is obsessed with doughnuts. Full on desi, ain’t she?

How did the @hyattamritsar know that I'm obsessed with doughnuts! Thank you! Happy World Doughnut Day everyone!! @splashindia promo in Amritsar!

3. Sunny was named amongst BBC’s 100 Most Influential Women list in the year 2016. She had then said: “It’s your right as a woman to follow your dreams.” Empowering, and so inspiring.

4. An animal-rights activist, Leone was named PETA’s ‘Person of the Year’ in 2016. She also throws her weight behind cancer charities.

5. The idea to take up Sunny as her stage name came from her brother, Sundeep Vohra who is nicknamed as Sunny. She has also used Karen Malhotra as her alias.

6. The actress is bisexual, a fact she realised in her teenage years.

7. Sunny was the first celebrity to launch her own app, in the year 2016. Other actresses including Sonam Kapoor, Disha Patani amongst many followed her soon after.

A couple more of The SunnyEmojis. Download now everyone and add to your keyboard! Its FREE!! https://q2fma.app.goo.gl/DdpT (copy/paste) emojify app

8. Did you know Sunny is the first celebrity to play self in a biopic? No star has ever played themselves before in a human drama.

Think you can add more about the star? Let us know in the comments box below!

For all those willing to watch Sunny receive the honour, #GoldAwards2019 shall start streaming on ZEE5 from 20 October 2019! Keep watching this space for more.

To know more about Sunny Leone’s life, don’t forget to watch Karenjit Kaur: The Untold Story of Sunny Leone on ZEE5 right away!

Badnaam Gali Is Best Web/OTT Film Of The Year 2019: 5 Reasons You Should Watch The Movie