The Casino Teaser Will Take Your Breath Away With It’s Glitz, Glamour And Gritty Action

The Casino, starring Karanvir Bohra, Sudhanshu Pandey and Mandana Karimi is set to release on 12 June 2020. Watch out for this #MyGameMyRules battle. 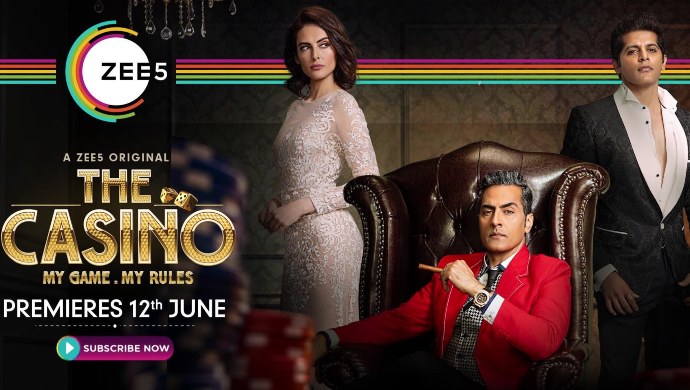 The Casino is a series full of plot twists and power struggles, starring Karanvir Bohra, Sudhanshu Pandey and Mandana Karimi in leading roles. It also features powerful performances by actors like Aindrita Ray, Mantra and Rajesh Khera, among others. This series is the digital debut of Karanvir Bohra. The 10-episode series is directed by Hardik Gajjar, and penned by Deepak Pachory. Produced by Back Benchers Pictures, the show is set to release on 12 June 2020.

Sudhanshu Pandey as Marwah plays the role of Karanvir Bohra’s father. Karanvir himself will be seen the role of Vicky. While Marwah is the current owner of the Casino, Vicky is the one and only heir to the property. That is until Mandana Karimi’s character Rehana steps into the picture. Rehana seems to be at the center of this power struggle trying to take the casino and its riches away from Vicky the apparent heir.

The teaser shows Rehana controlling both Vicky and Marwah using sex while playing her own devious game behind their backs. Marwah is the ageing tycoon doing everything he can to hold on to his fortunes. Vicky challenges him at every step to take control of the money. Among all of this, there’s a suicide, heartbreak, and a lot more drama.

This series is shot in Kathmandu and Pokhara in Nepal. The early glimpses from the teaser show scenes in beautiful locations. Mandana’s act of a dangerous seduction seems something to look forward to. Vicky’s struggle to get his rightful inheritances leads to some well-choreographed action sequences.

Tell us why you are excited to watch The Casino on ZEE5 and the best answer will win signed merchandise by the cast. Also check out the list of upcoming shows and films on ZEE5.

All You Need To Know About Paramavatar Shri Krishna Show, Re-Running On AndTV