O Chunarwali is a Holi song from the upcoming ZEE5 Original series The Casino. Have a look at the cast celebrating the festival of colours on sets! 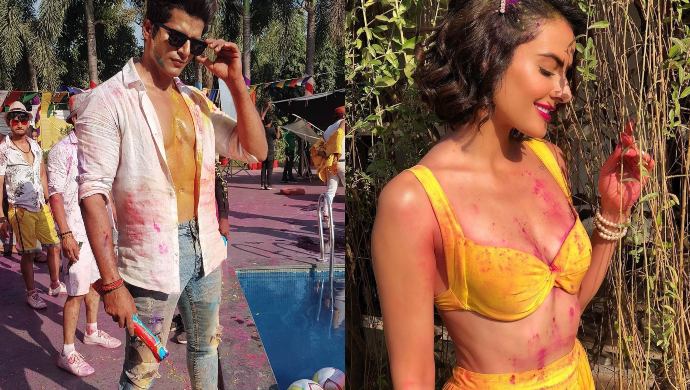 Currently, on floors and under production, The Casino is an upcoming ZEE5 Original revenge and crime drama starring Karanvir Bohra, Mandana Karimi and Sudhanshu Pandey in the lead roles. Revolving around Vikramaditya Singh Marwah aka Vicky, the story is set on the backdrop of ‘Casino Celebre’, of which Vicky is the heir! His father Shivendra Singh Marwah is an influential man and in a relationship with Rehana Chaudhari, who is the glamourous and hot star of his casino. Amidst all of this, they have a Holi song, which was recently being shot. Have a look at the star cast, Karanvir and Mandana, celebrating the festival of colours on the sets of O Chunarwali:

ZEE5 took to Twitter and shared a fun boomerang video on 27 February 2020, which said, “The shoot has started for your new Holi jam. #OChunarwali #TheCasino #MyGameMyRules”. The short video shows the uncontainable excitement of Karanvir Bohra, Mandana and background artist on the song shoot!

ZEE5 also tweeted the behind-the-scenes pictures of Karanvir and Mandana saying, “We can’t contain our excitement for the #OChunarwali song to come out. Here’s a BTS while you wait for it. #TheCasino #MyGameMyRules”. Aindrita Ray, who plays Camilla on the series was also seen looking hot in a two-piece dress at the shoot!

Mandana Karimi, who essays the female lead, Rehana Chaudhari, shared a beautiful picture on Instagram. She posed sideways in an elegant yellow dress with pink Holi colour (gulaal) splashed on her body. Her joy is evident in the post caption that read, “Happiness is when you get to play Holi at work. #casino #ochunarwali #comingsoon #april10th”. Her pink lipstick matched the gulaal!

The handsome Karanvir Bohra also posted on Instagram saying, “Whatchya lookin at? Holi song coming up #Ochunarwali #TheCasino @zee5premium #zee5originals”. In another picture, he also shared that Holi is his favourite festival and he loves it especially when he can shoot on the day!

The song O Chunarwali is penned by Shabbir Ahmed and choreographed by Dance India Dance Season 5 fame Mudassar Khan. Scheduled to release on 10 April 2020, The Casino is directed by Hardik Gajjar and bankrolled by Backbenchers Pictures. Stay tuned for more updates on the ZEE5 Original series!

Also, check out how your favourite Zee TV characters celebrated Holi Ke Rang and have enjoyed the festival of colours!