The makers wanted to cast someone who has a 'Bundelkhandi' accent and here's the result. 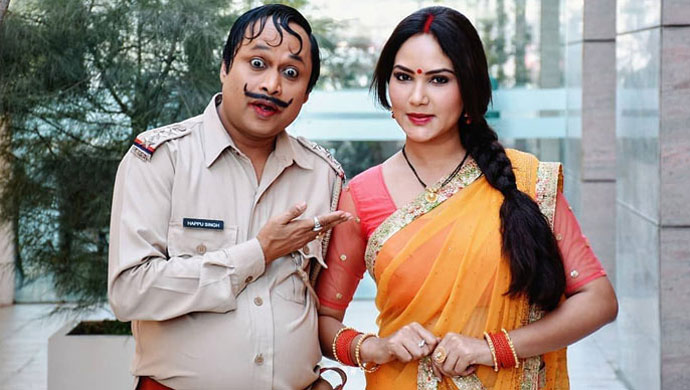 We all are excited to watch Happu Ki Ultan Paltan, starring Yogesh Tripathi. For those who are not aware (which is rare), the actor is best known for playing the role of a corrupt police officer in And TV’s popular show Bhabi Ji Ghar Par Hain.

Watch the episode of Bhabi Ji Ghar Par Hain below:

With Yogesh Tripathi, we will also see Kamna Pathak playing the role of Happu’s wife ‘Rajesh’! Well, that’s the name of Happu’s Singh’s wife on the show. One more interesting thing about this character is that she looks very similar to Sonakshi Sinha‘s Dabangg character. Using this as a brownie point, the makers decided to recreate the look of Sonakshi from Dabangg. After all, she is also the wife of a dashing Police Officer. Check out the images of both the actress side by side.

Twin sisters! (even our designer got confused)

While speaking to a leading daily, the actress spoke about her character “Every aspect of my character Rajesh in Happu, be it the attire, hairstyle and makeup, resembles Sonakshi Sinha’s look in Dabangg to a large extent and I take that as a huge compliment. Rajesh is a bindass, outspoken woman who tries her best to manipulate situations around her husband to get things done. She comes across as an adamant wife but at the same time, is very warm and welcoming if approached in the right manner.” Watch Kamna’s look in the show below:

The makers wanted to cast someone who has a Bundelkhandi accent, to which she added “I come from Madhya Pradesh so the Bundelkhandi accent comes naturally to me as my mom and I converse in the same accent. Though talking to her was easy, when it came to enacting the lines for Happu, it was slightly difficult. My mother came to my rescue and ensured that I get the accent correct.”

Did You Know Kunal Kemmu-Starrer ZEE5 Original Abhay Is Based On Real Crime Events?