There Was More To Sonam-Akshay’s Relationship In Pad Man, But ‘Was Edited’ – Here’s Why

In the film Pad Man, Sonam features as Pari Walia, a well-educated, sophisticated and fashion-conscious young woman from Delhi. 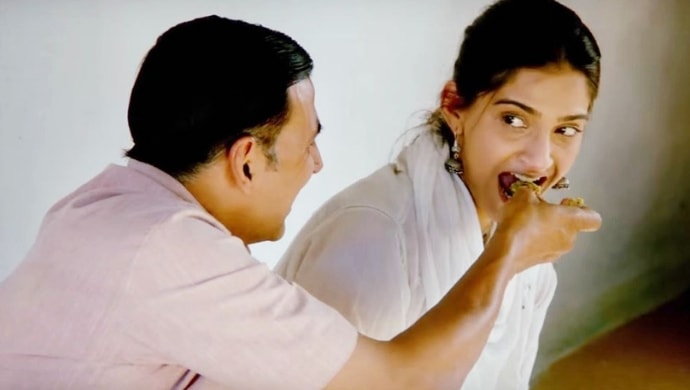 R Balakrishnan, popularly known as R Balki, and actor-turned-author Twinkle Khanna together made an outstanding contribution to celluloid glory with Pad Man. The film is a dramatized life story of Padma Shri Awardee Arunachalam Muruganantham, that also put a thunderous score on the board. The well-reviewed entertainer touches upon the stigma attached to the female biological phenomenon of menstruation and hygiene. As much as a mention of periods is considered as a taboo in India and team Khanna-Balki sets out to eradicate the ‘unseen’ and ‘untouchable’ aspects of the discussion we all need to be largely a part of.

After due thought and consideration, Tina brought on board her husband and superstar Akshay Kumar to play the male lead of a small-townie Lakshmikant Chauhan while Radhika Apte portrays his wife Gayatri and Sonam Kapoor represents the other end of the horizon. Sonam features as Pari Walia, a well-educated, sophisticated and fashion-conscious young woman from Delhi. Albeit, she only makes an appearance in the second half of this movie, she does enjoy a robust part and certain chemistry with Lakshmi (Akshay Kumar).

A certain segment of the critics and the cinema-goers felt that the romantic track between Sonam and Akshay doubled up as a distraction from an inherently promising plot. Addressing the same, Sonam had revealed to a leading news portal that there was more to Lakshmi and Pari in the film but was left out on the edit table. “There was more to that relationship than what was shown. It was edited out to make the film shorter. At the end of the day, if we were able to say what we wanted to say, I think it’s okay,” the Neeraja star said. “They couldn’t remove the last few bits so they did what they could to keep it short.”

The , actress feels that screen time shouldn’t be of much importance as long as the role justifies the message. She further added, “I don’t think anybody should even look at it that way. It’s very easy for me to play Aisha, or Mili in Khoobsurat. But to play Bittu in Delhi 6 or Pari in Pad Man, is what I find challenging. If you are a good actor, you’ll make an impact no matter what the length of the role is. You cannot be insecure about such things and constantly kill yourself over screen time. That’ll make you suffer. You got to be confident about the value you bring to the film as well as be conscious of what the film is contributing to the society at large.”

What are your thoughts about Sonam and Akshay’s camaraderie in Pad Man? Write to us with your views in the comments box below!