Varun Mitra: Thanks To People Like Sunil Chhetri, Football Is Getting Eyeballs Now 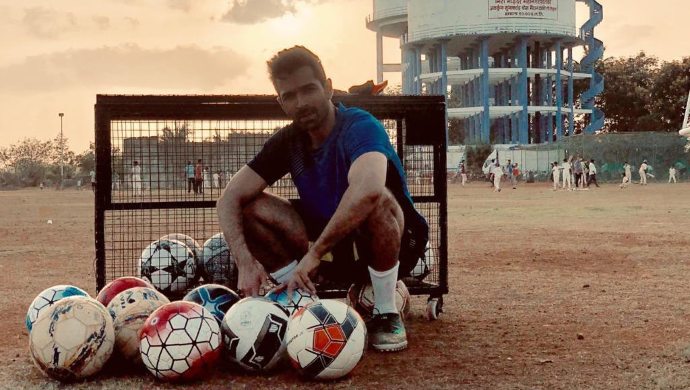 The young and dashing Varun Mitra is busy on the sets of ZEE5 Original sports series Bombers, his digital debut vehicle when I call him on a busy Monday evening. The sweet ‘Jalebi’ boy immediately agrees to trade his free time for my curiosity to dig deeper about his journey to the silver screen, ‘first love’ travelogue and what made him #GoBombers. The handsome star-in-the-making shares in a free-wheeling conversation how he was intimated on the sets of Bombers but had a great experience by the end of it. Read excerpts from the interview below:

I have been playing since I was a kid. I was a part of my school team, college team, I was a left midfielder. But I don’t watch football at all. I have never really followed it like that.

2. So which sport do you follow, are you following the ongoing ICC Cricket World Cup?

Nope (laughs). Cricket was although dominated in my house, but after the IPL started it got boring for me honestly. It was too much cricket happening all over the place. Now I play the sport, I don’t follow it on TV like that. I play squash, I swim, I play table tennis and I play football.

3. What attracted you to Bombers?

Actually, I wasn’t even aware I was being considered for Bombers. Sapna Pabbi, who is playing Andy in the series, I met her at some event and she told me she is in talks with this subject and they are considering me. I was like woah, nobody told me about it. Then I messaged Vishal Furia, who is the director. I kind of sent my work across to him, I met up with him. He narrated the show script to me, told me the way he was looking at shooting it, how he was looking at the character of Badol. So that happened and the producers had apparently seen my TED talk somewhere which starts with a three-minute football narration of mine. It all just came together and Vishal was a big reason for me to take up the show. He is a big director, I have seen his works and his perspectives on things, then, of course, there was ZEE5, a good script, a great cast – Aahana Kumra, Ranvir Shorey Sir. It was a go on all fronts, once it was offered to me there was no looking back at it.

4. What all was a part of your preparation to play the captain of a football team?

Since I have been playing football as a kid, that body language and all was there. But some training for the free kicks, specific training for the dribbles that the character does. We did that, we worked with a guy called Archis. To be honest, our training also happened while we were shooting the series. Archis used to be there with us on the sets, the choreography or the sets if we didn’t do anything right because it’s all very on the spot, what’s happening and what’s not. What actually we found really hard was playing football on a big field because we all got used to a 5 on 5 games. Suddenly to play on a big field with 11 on sides, then you realize how fit you are.

5. Did you have any real-life football players in the series, Sunil Chhetri makes his digital debut with Bombers?

6. The anthem of Bombers is really catchy. What was your first reaction?

Honestly, I actually heard the full thing properly when I went for the screening of the show. It was three days before the release. We all loved the opening credits and the anthem, it is really catchy and that whole inspirational motivational vibe.

7. What’s your view of the music of Bombers?

I love the background score. I actually went and told the producer who was on it. The background score, in fact, is something I was worried about because it makes it or breaks it. It was just spot on, not too much, not too little, just correct. I personally really really liked it. It’s not trying to feed you the emotion. The whole thing we have done, we have done it in a really subtle way. If the background had been harsh, it would have been really jarring.

8. You have done several ads, short film, and Jalebi. How is Bombers different all of your previous works?

It was physically tiring as hell. What was different about it was there were so many different actors. It was an ensemble cast. Every actor had a different energy, different style of working, approaching the character, some liked to rehearse, some didn’t like rehearsing. It was a nice mix of sorts. Also Vishal, the way he wanted to treat this set, he doesn’t like doing rehearsals, he believes in the spontaneity of the moment. He likes to find the relationships and the characters on the sets. It was a very different style of working for me, it was interesting. You observe people also, especially those like Aahana and Ranvir Sir who have done so much work, how they approach the character, it was different learning curve altogether.

9. How easy or difficult was it to work with an ensemble cast?

It was very simple. In the beginning, I was a bit intimated by all of them, because I am relatively still fresh and they have been around for many many years. But once I did one or two rounds of rehearsals and scenes, everybody was just so friendly and easy-breezy. They all fell into their character and I think the relationships also just developed organically.

10. Any fun incidents you can share from the sets?

There was nothing funny as such it was a pretty serious set. Funny really used to be our haalat at 5 o’ clock in the morning when we would finish our football. Ranvir Sir used to be cracking us up all the time. There were many moments when we had to cut the shot because one of us would be laughing. He does something, even if he does it seriously, it would come across as funny. He used to keep taking Chang’s case. Because Chang used to keep singing and they used to share a door in the vanity. Aahana has got lots of stories and she loves to tell them. It was so simple to work with her. We had great chemistry is what I think, by far her and my scenes are my favourite in the show. Our chemistry has come across really nicely, the serious parts, the intimate parts, and the fun parts.

Sapna I had known from before, she is a friend of mine. It was chill. It wasn’t new energy I was meeting, it was all normal. Mine and her scenes are also more straight, there is less contradiction between us so fairly simpler.

11. Did you explore Chandan Nagar?

We had no time at all. Because we had to come back here and finish the schedule. We would just go to the sets and come back. But we did see the architecture, it is really beautiful. Maybe sometime in winter one can go back, summer is too hot.

12. How does Bombers stand apart from other sports-based shows/films?

There are no sports shows that have come. The only sports-based show that has come out is on cricket. What makes it stand out is that we are not telling the story of football, it’s the story of the characters. The sport is a thread tying up these characters together. It’s the story of redemption, journey of this character putting a team together, going through a phase while doing that, chasing a goal after a big tragic incident in their lives.

13. What are your comments on the state of football culture in India?

Thanks to people like Sunil Chhetri Sir, the sport is getting eyeballs now. There are people watching it. More than watching it, people are playing it now. There are a lot more turfs when I had come to Mumbai there were zero. Now there is one in Malad, Oshiwara, at least five-six turfs around my house. They are always booked! So definitely people are playing the sport a lot more than they were playing earlier. Thanks to Sunil Sir, people are going to stadiums to watch tournaments. Aur kitna he cricket dekhenge na logg? Football is a much faster game, it gets over in 90 minutes. It will definitely start getting a lot more attention.

14. Do you think Bombers may or should have some sort of impact?

Definitely. All our minds are so influenced by movies and content we watch on the digital platform. It is an inception sort of thing, the idea of love we have, the idea of sports that we have, struggles and all is coming from movies. If the audience does connect with Bombers, it will definitely make them pick up the sport or save a ground near them. It will do that trick.

15. What made you choose Bombers as your digital debut vehicle?

I got offers after Jalebi. Bombers are different from what I had done earlier, in Jalebi I was this desi guy. Also, I was a midfielder in school, so I never got to be a captain. When I got this role, I was like yeh toh karna padega. Like I said earlier it ticked all the right boxes, ZEE5 platform, the director, the script, the producers…it was all a go!

16. You have hosted travel shows. Will you be focusing on acting only or is hosting on the cards too?

I have hosted lots of travel shows. I did them for four years but the problem is that they take you away for three-four months. After I did my film, I wanted to focus more on the acting front. To concentrate on acting, my workshops, auditions, it is a conscious decision to take a step back from travel shows. It’s not like I am going to stop doing travel shows, I love doing them. It will be a mix of both hopefully.

Are you excited to catch the finale episodes of Bombers in ZEE5? Share your love for Bombers in the comments box using the hashtag #GoBombers #BombersBaarBaar.

In the meantime, don’t forget to catch the latest blockbusters like Simmba and Uri: The Surgical Strike on ZEE5.

Did You Know Lord Vishnu Of Paramavatar Shri Krishna Has Been In A Bollywood Movie?