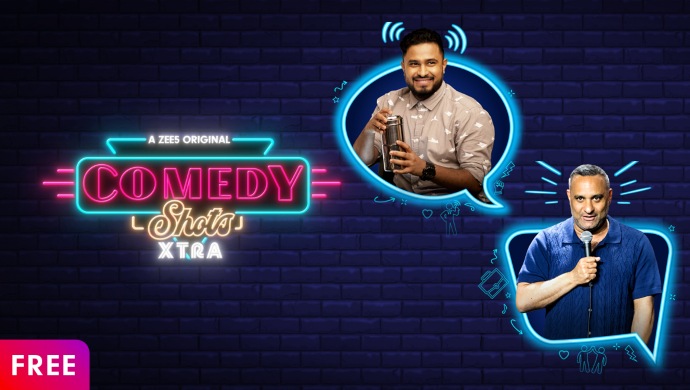 Comedy Shots has introduced you to a bunch of talented homegrown comedians. It had a healthy mix of well-known comedians including, Sanjay Rajoura, Rahul Dua, Sumit Anand, Gaurav Kapoor and Aadar Malik, to fresh faces on the scene like Pratyush Chaubey, Anubhav Singh Bassi and Sumaira Sheikh. These bite-sized comedy bits are all available to watch for free on ZEE5.

Comedy Shots features an interesting collection of comedians and jokes. Anubhav Singh Bassi and Pratyush Chaubey were not yet the widely popular comedians that they are today. The show also brings out the unique comic voices in India including Sumit Anand, Sanjay Rajoura and Sumaira Shaikh. The show has jokes, and funny stories about classic Indian families, summers in India, being unemployed and even running marathons, all in 15 minutes each.

This series also includes a bonus episode with Abish Mathew interviewing Russell Peters, the internationally successful comedian. Abish talks to Russel Peters about the stand-up comedy scene in India, comedy in general and even hip-hop.

Watch this interesting and funny clip of Comedy Shots here.

Russell Peters with Abish Mathew first begins sharing a funny interaction about their earlier meeting 7 years ago, where the reveal some (scandalous?) secrets of that time. Russell Peters then touches upon his joke-writing method of performing. They then play a fun game, which includes Russell trying to guess the story of ZEE5 Original Series, by looking at the posters which include, GOD (Gods Of Dharmapuri), Barot House, NERD (Neither Either Really Dead), Auto Shankar and REJCTX.

Look out for this entertaining as well as insightful interview between two vastly experienced comedians.Watch the series Comedy Shots, and let us know who was your favourite comedian, in the comments below

Reality Is Stranger Than Fiction:7 School Scandals Like 'Bois Locker Room' That Shocked Us