Watch Karisma Kapoor And Co. Talk About Their #Mentalhood Journey In An Exclusive Chat

In a tete-a-tete with Janice Sequeira, the #Mentalhood cast spoke about their digital journey and also nailed the modern day parenting quiz. 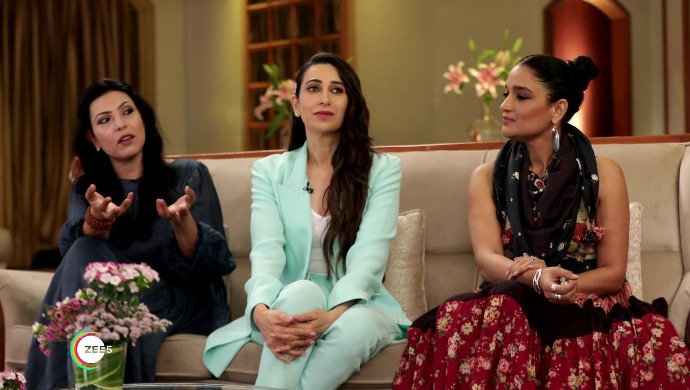 Mentalhood is an upcoming ZEE5 Original web series which features Karisma Kapoor, Sandhya Mridul, Shilpa Shukla, Shruti Seth, Dino Morea, Sanjay Suri, Tillotama Shome etc. The emotional web series will premiere on the 11th March 2020 on ZEE5. The story of the series will revolve around the life of mothers and their motherhood journey in shaping their kids’ life.

Recently, during the trailer launch of Mentalhood actors Karisma Kapoor, Sandhya Mridul and Shilpa Shukla got candid about their upcoming series. In an exclusive fireside chat, the B-town beauties spoke about their upcoming original series Mentalhood. In a tete-a-tete conversation with host Janice Sequeira, the actresses spilled beans about their on-screen Mentalhood journey. Bollywood iconic actress Karisma Kapoor was excited as she got to play a role in the series as this is something that she goes through every day. She even said that it is the motherhood and Mentalhood of life today and that is what we are telling the audiences and am proud that am part of the show.

In the video, the actresses give solutions to parents who have sent in their questions about their kids. Actress Shilpa Shukla said that during her childhood, she stole a beautiful flower and then cried for 2 hours after she realised that the flower belonged to someone’s garden. Actress Sandhya Mridul narrates her stealing story and says that her brother wanted the money so she stole it from her dad’s wallet. The actresses even play millennium game wherein they have to understand the modern-day lingo. Karisma simply nailed the game and bowled us with her knowledge of lingos.

Karisma gave an important lesson to all parents out there and said it is important that you talk to your kids and get involved in their lives. She even said that she is a disciplinary mom and always wanted her kids to have homemade food. Sandhya said that she is more of a yoga person and cannot start her morning without meditation.

Karisma, Sandhya and Shilpa talk about their journey while shooting for Mentalhood. Karisma said that the show is synonymous to her real life and what she was going through in life. She even said that she has learnt a lot in the entire journey and the show has narrated a different perspective from a mother’s point of view. While Shilpa Shukla said that she took up the web series as she got to know about the spectacular cast that is in the show. She said that in this web series women are narrating their own story. Sandhya who is essaying the role of a momzilla Anuja Joshi in the series says that she took inspiration from her friends. She spoke her heart out and said that she enjoys such shows where a story is depicted from a women’s perspective. Karisma said that on the sets of the show, the energy was always high and felt like at home. The makers will showcase the real hardships of a mother in handling her kids. The series is directed by Karishma Kohli and written by Ritu Bhatia.