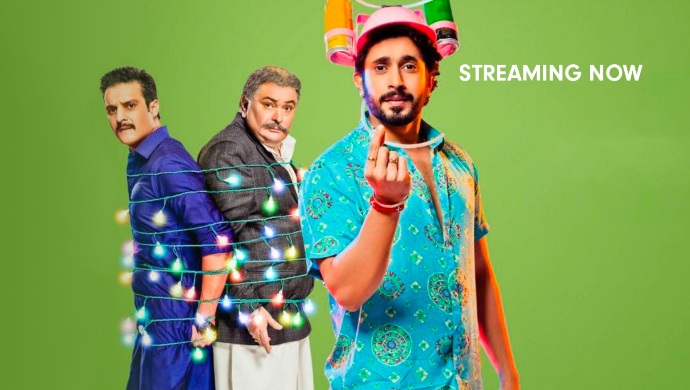 On April 30, 2020, news broke out in India, that veteran actor Rishi Kapoor passes away at 67 years of age, after a long battle with cancer (leukaemia). Carrying the Kapoor lineage forward, he was the grandson of Prithviraj Kapoor and the second son of actor-director Raj Kapoor. Having done over 123 incredible films in the Indian film industry, like Kapoor & Sons, Mulk, 102 Not Out, Manto and others, his second-last film was Jhootha Kahin Ka, released on July 19, 2019. The premium comedy movie is made FREE for three days, i.e, May 1 to May 3, 2020, on ZEE5. Know more about Rishi Kapoor’s character and the film.

Watch the hilarious trailer of the movie here:

Essaying the role of Yograj Singh, Rishi Kapoor explores the genre of comedy with his impeccable acting skills. He opens the film with the appearance of a villager, wearing a blue kurta and a gamcha around his neck. He also wraps a cloth around his head, almost resembling a pagdi. The story follows the lives of two young boys Varun Singh and Karan Pandey, played by Omkar Kapoor and Sunny Singh, respectively. They go to Mauritius for higher studies and change their lifestyle, so much so that they don’t want to go back home to India.

There, Varun falls in love with Riya Mehta, portrayed by Nimisha Mehta, and lies to her that he is an orphan. Trouble begins when Rishi Kapoor arrives in Mauritius as Varun’s father, Yograj. Varun seeks his friend Karan’s help to keep his secret. Yograj has a peculiar quirk and advises Karan on marriage and life in general. The film also features Jimmy Shergill as Tommy Pandey (Karan’s father), Lillete Dubey as Ruchi Mehta (Riya’s mother), Manoj Joshi as Mr Mehta (Riya’s father) and Rajesh Sharma as Kokey Singh.

Bankrolled by Soham Rockstar Entertainment and Shantketan Entertainments, the film has been directed by Smeep Kang. The screenplay is co-written by Shreya Shrivastav and Vaibhav Suman. Its soundtrack is composed by rapper Yo Yo Honey Singh and Sunny Leone makes a special appearance in the song Funk Love. The supporting cast includes Pujita Ponnada as Gauri, Rucha Vaidya as Sonam, Rakesh Bedi as Sonam’s father, and Neelu Kohli as Sonam’s mother. Shot in Punjab, Mumbai and Mauritius, the comedy-drama is a complete entertainer.

You can get Live Updates on Coronavirus Outbreak on ZEE5 News, streaming now.