Watch the lead cast of the show, Prasad Jawade, Neha Joshi and Jagannath Nivangune take the quiz and also check how many you can answer correctly. 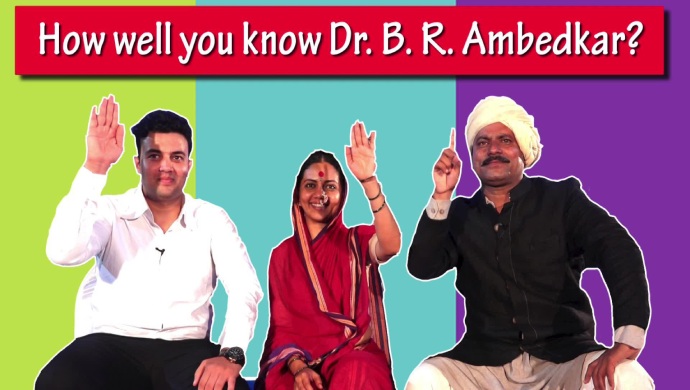 AndTV’s newest show ‘Ek Mahanayak – Dr. B.R. Ambedkar‘ is creating all the right kind of noise with its early episodes. This is the first series to bring to life the story of freedom fighter and iconic Dalit Rights Activist, Dr. B.R. Ambedkar. The show is a docudrama focusing on the life and journey of Dr. Ambedkar right from his childhood to eventually becoming the architect of the Indian constitution.

The story has already touched upon some of the harsh incidents about Ambedkar’s life where he had to deal with the horrors of the caste system. Neha Joshi and Jagannath Nivangune, both established Marathi actors play the role of Ambedkar’s parents. The role of Dr. Ambedkar is played by Marathi actor Prasad Jawade.

The three actors took a quiz to test their knowledge about the relentless work and uncountable good deeds Dr. Ambedkar completed during his life. The quiz includes some interesting questions like ‘Which policy of Mahatma Gandhi did Babasaheb Ambedkar disagree with?’ and ‘Which text was burnt by Ambedkar and his followers?‘ Other questions include the name of his political party, his newspaper publication as well as his adopted religion.

Watch here to see how the actors aced the quiz.

How many questions did you get right? Let us know in the comments below. To know more about Dr. Ambedkar and his life, watch the show ‘Ek Mahanayak – Dr. B.R. Ambedkar‘ every Monday to Friday on AndTV and stream it anytime on ZEE5. If you liked this show, here’s another interesting ZEE5 original series ‘Hutatma‘ which narrates the story of how Maharashtra came into existence with a movement that started in 1956.

CONTEST: Would You Like To Go For A Spooky #GhostWalk With Divya Agarwal And…

Exclusive! Kark Rogue Actor Rajesh Sharma: We Shot Every Scene Both In Hindi And Bangla