Rishi Kapoor was a star we can never forget. An old friend remembers a few precious moments spent with 'Chintu' and shares some stories with us. 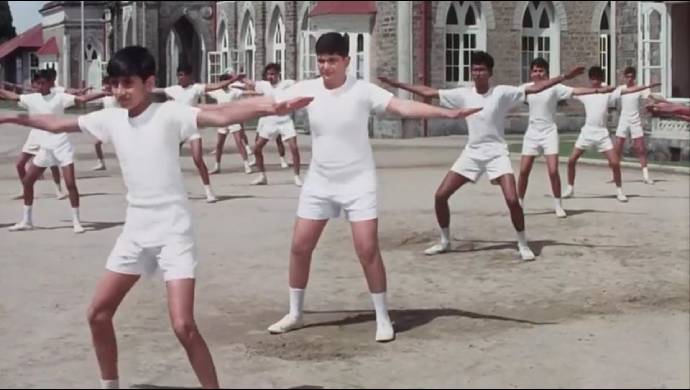 It all started with a smile, a charming smile that took us back to his debut, years ago, in ‘Mera Naam Joker’. While he danced to Laxmikant-Pyarelalji’s melodious tunes and romanced the young and gorgeous Dimple Kapadia in ‘Bobby’, he stole the hearts of every woman watching him from the audience.  What happened next was nothing less than a storm by which the legend Rishi Kapoor left everyone smiling and blushing with his roles in Chandni, Prem Rog, Karz, Laila Majnu and Amar Akbar Anthony to name some.

Have you watched the movie yet? If not check it out here:

If there’s one thing that we can all agree on, it’s the fact that his passing away has created a huge void in the Hindi film industry. However, he lives on in his movies. One of his most memorable films of all time will always be ‘Mera Naam Joker’, while most of us have watched this iconic classic, we bring to you some rare behind the scene pictures of Rishi Kapoor from ‘Mera Naam Joker’, shared with us, by St. Paul’s School, Darjeeling

His journey as an actor began with father Raj Kapoor’s ‘Mera Naam joker’, where he portrayed the protagonist’s life in school. In the frame is a shot from the movie where Rishi Kapoor is seen standing, and observing actress Simi Grewal being tutored by the actual PT teacher of the school, Mr Hardip Singh, along with students of St. Paul’s School, Darjeeling, where the sequence was shot.

In the above picture, we see Raj Kapoor sharing some animated conversation with Mr. Hardip Singh. We spoke to an ex-student of St Paul’s School, Mr. Suva Prosad Mukherjee, who was in class seven when this sequence was shot, in the year 1967. Mr. Mukherjee said, “I have some very fond memories of that time. I was in class seven and the class eight boys were a part of this scene. We would watch them while they were shooting. I particularly remember how we were watching the shoot on our top field, and the weather suddenly became hazy and the shoot was getting interrupted time and again. Chintu and I became good friends, we would play cricket together, and he would sit with all of us students at the dining hall and eat meals together. I can still remember the scrumptious meal and some yummy laddoos, that we got as a treat from Raj Kapoor when the shoot got over in the school. That is a meal I will never forget.”

Another incident Mr. Mukherjee remembers is when Rishi Kapoor had to do some exercise for the scene, “While giving the shot, Chintu’s shorts tore off from behind and he suddenly stopped. Simi Grewal asked him what was wrong, he would not answer, but eventually, he did. He told her his shorts had torn and that took a lot of courage for a young boy.” He also jokes that just like in Mera Naam Joker, where the young Rishi Kapoor is shown having a crush on his teacher Simi, most of the boys in the school had a huge crush on her then! “Chintu was extremely friendly and we kept in touch for about a year after that” Mr. Mukherjee reminiscences.

While you travel back to the days where Rishi Kapoor left us awed with his acting and charisma, we hope his soul rests in peace. Spend some memorable moments with our all-time favourite Rishi Kapoor and watch some of his best movies on this ZEE5 presentation- Tribute To Rishi Kapoor.

PLAY On ZEE5: Get Ready To Make ZEE5 Your Destination For Entertainment And Gaming