Yogesh Tripathi On Happu Ki Ultan Paltan Turning One: Never Thought I’d Have My Own Show!

As Happu's Paltan grows a year older, we did an exclusive interview with Yogesh Tripathi about his journey from theatre to ads and finally TV! 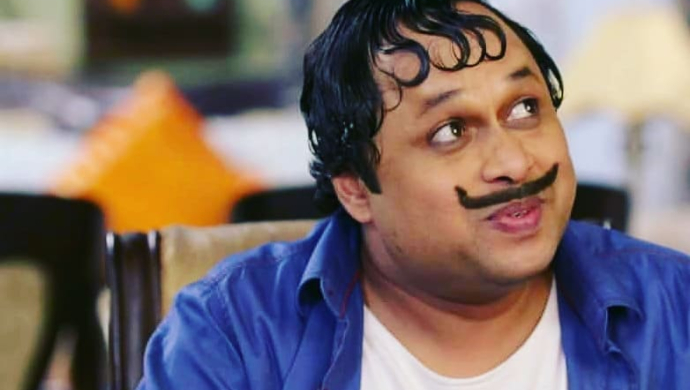 &TV‘s popular comedy show Happu Ki Ultan Paltan recently grew a year older. The show revolves around Happu Singh, a police constable who tries his best to manage his chaotic family, which consists of his wife, 9 kids, and his mother. The star cast of the show consists of Yogesh Tripathi, Himani Shivpuri, and Kamna Pathak. The show has garnered a massive fan following, thanks to the different flavors the characters bring to the show. The favorite among the audiences has to be the lead, Daroga Happu Singh, portrayed by Yogesh Tripathi, who has been commended for his acting. We had a candid conversation with the actor during the celebration of the show completing one year, during which he revealed some interesting facts about the show and its cast.

1. Happu Ki Ultan Paltan is a spin-off of Bhabi Ji Ghar Par Hain. How was it to bag a show focused around your character?

Director Shashank Bali was the one who had approached me for this show while we were doing Bhabi Ji Ghar Par Hain. I had previously worked with him for the TV show F.I.R for about 6 years. Then, we worked together for a year in Jijaji Chhat Par Hain. He then asked me out for a third new show. Initially, I didn’t realize that the show was going to be based solely on my character. I thought that there’s some show where my character of a police officer would be required someday. Later, when I was informed that the show is completely focused around my character, I was ecstatic. Never in my life had I thought that a show would be named after my character. It’s a good feeling!

2. How has your overall experience been working in the show for the past year?

The experience has been phenomenal. Honestly, it was all possible because of the brilliant casting paired with a wonderful crew that manages everything. Working with them was such a joy that the year literally flew by without our knowledge!

3. In your one-year Happu journey, who would you like to thank?

I would definitely like to thank our director Shashank ji. It is because of him that I’m here in the first place. I would also like to thank our production house Edit II Productions, for whom I’m been working for the past 12-13 years, and producers Sanjay ji and Benaifer ji who have supported me throughout the journey. Our writer Manoj Santoshi for writing this wonderful character. The actors too have been really nice to me. In short, the entire cast and crew of Happu needs to be thanked.

4. What do you have to say about your other co-stars? How is it with Katori Amma who you seem to share a great motherly bond with?

All of my co-stars are very supportive. Everyone except Himani ji were new to me but we bonded in the first week itself. And because it’s a comedy serial, we have fun together. It’s a joy working with everyone, especially Himani ji, who’s the senior-most actor on the set. I knew her quite well as I had previously worked with her in a couple of plays and also in F.I.R. We share a great bond both on and off screen. As she’s also from a theatre background, we improvise a lot of scenes together.

5. Tell us about your journey, from theatre to ads and finally TV. What struggles you had to go through, hardships you had to face to go from Yogesh to Happu?

It all began in the year 2000 when I was associated with Sanskar Bharati where I did a couple of plays. In Lucknow, I did street plays. Followed by proper plays on the stage which I did for almost 4-5 years. Only then, I took the train to Mumbai. The journey has been full of ups and downs. I faced trouble initially as everyone in my family was into teaching. They took their own sweet time to accept that someone from their family wanted to pursue theatre. They accepted it eventually. After coming to Mumbai, I struggled a lot too. After 2-3 years, I did ad films, moved on to theatre and then with F.I.R. came my big break. While playing various characters in the show, I had the opportunity to improve myself as an actor and how I look on-screen. This show was followed by Bhabi ji, during which my character became hit among  audiences. That’s when this show (Happu Ki Ultan Paltan) came into picture. Well, that’s my journey of 12-15 years in the industry.

6. Did comedy come naturally to you? Or did you refer to something while preparing for the character?

I think comedy comes naturally as I have gotten used to it. It has become sort of like a habit now. Sometimes you don’t get the chance to do something you want. But I also work hard portraying the role that has been offered to me.

7. What quality of Happu Singh do you like the most?

Everything about Happu is likeable. His walk, his talk, his smile. Everything! His body language is unique and quite different from me. His language which is a mix of Bundelkhandi and Braj Bhasha also adds to the beauty. Happu’s language and body language both make him stand out!

8. What are the three qualities according to you that every husband should have?

Loving his wife, being emotional about his mother, and caring about his family. These are the three qualities that I think every husband should possess.

9. There’s a new ZEE5 film called Shukranu based on forced sterilization during the emergency era. After nine kids, do you think Happu should also get nasbandi done?

Definitely not! Happu’s character is so romantic that he would even think of having the tenth kid.

10. Even though the show is praised by many for its humorous content, there’s also criticism. So how do you deal with negative comments?

Thankfully, I didn’t get any such negative responses. In fact, everyone says that they like watching the show which comes on &TV in the primetime slot. However, if I receive any such criticism, I try to work on it and learn from it. That’s the only thing you should do about it!

Do you like Yogesh Tripathi’s role in Happu Ki Ultan Paltan? Let us know in the comment section below.