Yours Truly Review: Soni Razdan As Mithi Kumar Profiles The Sweet And Bitter Of Loneliness

Yours Truly, by National Award-winning director Sanjay Nag, premieres on ZEE5 on 3 May 2019. It stars Soni Razdan, Aahana Kumra, and Pankaj Tripathi. 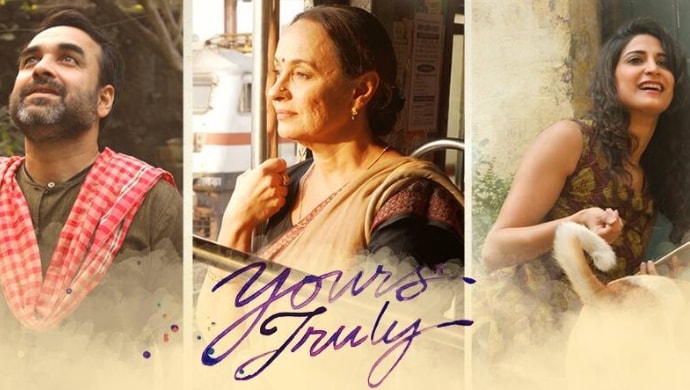 National Award-winning filmmaker Sanjoy Nag’s latest Hindi offering is as unique as its English title: Yours Truly. The film opens with a shot taken straight from the life of a middle-class woman – also synonymous with the life of Soni Razdan’s character Mithi Kumar. Lying on a bed fenced by a mosquito net, Mithi ponders if it would be any different from the rest in her life so far. Her domestic drudgery begins by popping some medicines with the sound of tap water running cut by that of a train’s horn in the background. Mithi gets enveloped in her daily chores at her ancestral home, going by its dilapidated condition.

Watch the trailer of Yours Truly here:

Children chatter on their way to school while her neighbour struggles to get her daughter up in time. The landscape of Kolkata dominates the everyday life of Mithi Kumar. She may be living alone, away from her younger sister Lali Kumar (Aahana Kumra) but she carries the essence of the West Bengal capital in her heart. The feeling of longing and loneliness are towered by the overwhelming vastness of the metropolitan city. After a successful run at the Busan Film Festival and a premiere at the Kolkata International Film Festival last year, Yours Truly makes a pitstop at ZEE5 for a world digital premiere.

Over the next 77 minutes, Sanjoy Nag manages to offer Mithi’s mundane routine and her passionate and ever-fuelling fantasy in equal parts on a well-garnished platter. A voiceover of a railway station announcer accompanies Mithi in every scene, for she imagines he speaks directly to her. So much so, that the vivid imagination led to an exchange of letters of eight years now. Imagination is clearly on the steering wheel in this crisp saga based on Annie Zaidi’s The One That Was Announced.

Yours Truly offers heart-warming glimpses of the character of an Anglo-Indian teacher Violet Stoneham from 36 Chowringhee Lane (1981). Turns out Soni played Violet’s niece in the Aparna Sen movie. The scene where Lali shows up with a professor stud beau and even when Mithi couldn’t sleep as she listened to her neighbours moaning hard through steamy sex at night – we know Yours Truly makes us nostalgic. Nag has sprinkled melancholy all over the film but kept the fragrance of it intact. The mood is set from the way Mithi talks about weaving a cover for her sister’s teapot or even when she gulps down a glass of whiskey sitting on an office bench all by herself. However, Kolkata appears more embracing than ever as Mithi cries tears of joy during the Durga Puja.

Aahana Kumra and Pankaj Tripathi take turns to mesmerize us besides Soni Razdan in Yours Truly. Pankaj plays a tenant who resides below her crumbling residence and also the source of the sounds made during coital exercises that keep Mithi up at night. However, despite strong characters like Lali and Vijay, Yours Truly banks on Mithi and Mithi’s troubled shoulders alone.

Soni Razdan’s spectacular performance makes us want to see more of her on the screen. She emotes more through frown lines and short smiles than words. Laced with grace and determination to find her ‘the one,’ Mithi questions why the world revolves around hope and eventually falls prey to the trap herself. Soni’s character is a beautiful reminder and a breakaway from the common notion that an elderly single woman tends to be bitter. Take a second look at Mithi, she is all things saccharine sugar laced with a heavy dose of acceptance on the side as she takes it all in her stride with a smile.

Have you added Yours Truly to your weekend bucket list? Tell us what attracted you the most about the film in the comments box below.

Sushant Singh Rajput's Sonchiriya Is Unlike Any Dacoit Drama You've Seen Before, Now Streaming On ZEE5