Reviewed as "pleasantly quirky" by Glamsham, ZEE5 Original film Shukranu manages to achieve the balance of humour and sensitivity both! Read more! 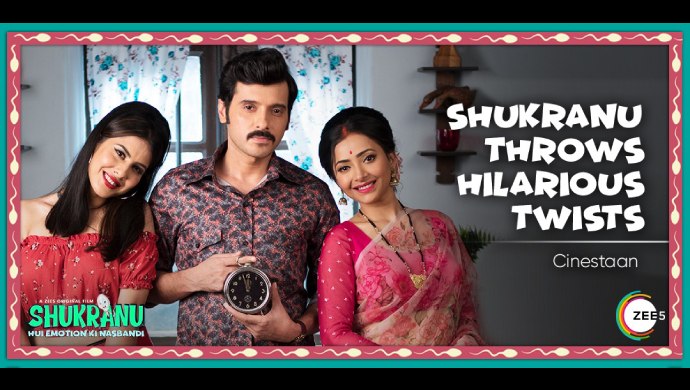 Premiered on the 2nd anniversary of ZEE5– the largest OTT platform in India, Shukranu is a humorous take on the grave issue of forced sterilizations on Indian men during The Emergency declared in 1975. Divyenndu plays Inder, who falls in love with Akriti, essayed by Sheetal Thakur. But things take a hilarious turn when Inder is dragged to get a vasectomy (nasbandi) done. Unfortunately, this takes place just two days before he gets married to Reema, beautifully portrayed by Shweta Basu Prasad. Directed by the critically acclaimed Bishnu Dev Halder and financed by Reliance Entertainment, Shukranu- #PyaarKiKatiPatang has been received well with loud laughs and open minds!

With tremendous appreciation for the #PyaarKiKatiPatang film, critics have a lot to say about Shukranu and its influence!

1. A leading entertainment portal, The Envoy Web deemed Shukranu to be a fun ride that manages to tickle and teach you about the problems faced by a common man during The Emergency times!

2. Cinespeaks.com rated the movie 4 and a half stars and said, “Bishnu Dev Halder (director) has done a tremendous of highlighting male sexuality and vulnerability. The film gives out the vibes of the 70s perfectly in which it is set!”

3. Box Office Collection India reviewed the ZEE5 Original film with the words, “One of the major victorious factors in Shukranu is its screenplay which takes the storytelling on an interesting level! It tells a sensitive topic with a perfect dose of entertainment!”

While the media and critics contribute their two cents on the film, why would fans and admirers be behind? Showering immense love on the actors as well as the director, here’s how the audience finds the romantic comedy film to be:

Saw #Shukranu 🤣🤣 is Hilarious film streaming on @ZEE5Shows. A hilarious tale of emergency era. Alluring @shweta_official has done her magic 😎 what a perfectly playing this role you're. 👌
All in their absolute best ⭐⭐⭐⭐
Treat a watch! @RelianceEnt pic.twitter.com/LLwpA5qndg

Though shown as a comedy, #shukranu *ring @divyenndu, @shweta_official @Sheetal__Thakur is a grim reminder of the Emergency excesses & what could have happened if Sanjay Gandhi had his way for a longer period.
This @ZEE5India original is worth a #ValentinesDay watch.

The story is carried well with nice comic timing. Overall a nice entertainer. Enjoyable and worth your time.@zee5premium Thank You for this one.

In the comments section below, share with us your views about the unique film. But first, go watch Shukranu #PyaarKiKatiPatang, streaming exclusively on ZEE5!

Don’t forget to check out our collection of movies streaming on ZEE5, exclusively for you!

Rajeev Khandelwal On Upcoming ZEE5 Series Naxal: I Rejected Another ZEE5 Show For This