ZEE5 Celebs Join PM Modi At 9 PM To Drive Away Darkness With Diyas And Candles! 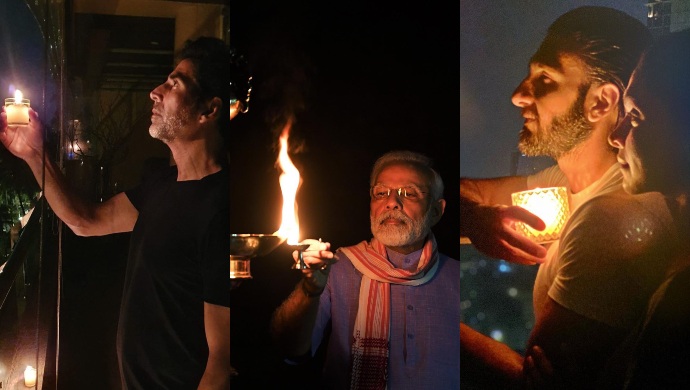 Last night, we witnessed another display of India’s unity in the fight against Coronavirus. The Prime Minister requested the country to shut off their lights and light diyas and candles in their balconies as a symbol of bringing light and positivity to these dark times. The nation followed suit, the charge being led by celebs from Bollywood and some of the biggest stars on Zee TV. Here are a few celebs who showed their support to the government’s #9pm9minutes initiative, as well as got wonderful photos in candlelight.

But first, here’s the post of PM Narendra Modi showing that he follows his own advice as well.

Akshay Kumar. who can be seen in ZEE5 films like Pad Man, Holiday, and Rustom, showed his support for his initiative by posting a picture of him standing with a candle in his balcony.

Together we stand and together we will come out of this dark phase. Till then stay strong, stay safe ✨ #9Baje9Minute

While Akshay Kumar posed alone, Ranveer Singh shared a photo with wife Deepika Padukone lighting a candle for nine minutes at 9 pm. You can watch Ranveer Singh in the film Simmba on ZEE5.

Shraddha Arya seen as Preeta in Kundali Bhagya posted a story of  a candle lit on her window sill with the caption, “Let there be light.”

Dheeraj Dhoopar, her co-star who plays the role of Karan Kuthra on the show, posted a photo of him holding a candle in his balcony.

Karisma Kapoor, who was seen in the ZEE5 series Mentalhood, shared a poster of her lighting a candle in her balcony. She also fell prey to the fake photo of India lit up at 9 pm compared to the rest of the world when seen from a NASA Satellite and shared it on social media.

Karanvir Bohra, who will be seen in the upcoming ZEE5 Original series The Casino, was seen lighting candles in his balcony with his wife and daughters, one of whom doesn’t seem to like candles very much.

Rahul Dev was seen in the ZEE5 Original film Operation Parindey and the newly-released series Who’s Your Daddy. He posted a picture of him and his wife Mugdha Godse holding a candle in their balcony.

In the words of my beloved master Tarneiv Ji – “PM Modi, recently, aptly and wisely said, “I’m like a gatekeeper for this nation!” As a gatekeeper guards a property… similarly we can keep a vigil on the words that enter as thoughts or leave our premises as spoken words…guarding our inner sanctuary or the Light within! Tarneiv…” #9pm9minutes #solidarity #unity #india #gratitude #prayers #strength

Kanika Mann, the eternal ray of sunshine, shared a post of her posing with both a diya and candle in the balcony. She is seen as Guddan in the Zee TV show Guddan Tumse Na Ho Payega.

Arjun Rampal, who starred in the ZEE5 Original series The Final Call, shared a short video of him and his partner Gabriella Demetriades holding a candle in their balcony.

Mona Singh, who can be seen in the hit web series Mission Over Mars and now Kehne Ko Humsafar Hain, shared a video of her at home with her mom, who turned off all the lights lit a diya and rang bells praying for a better world.

At the end of the 9 minutes, action hero Vidyut Jamwal showed us the most extra way to extinguish candles in this hilarious but impressive Instagram post. You can watch his entire Commando film trilogy on ZEE5.

You can watch how the rest of the country followed the PM’s initiative in the video here.

Get all the live updates of Coronavirus in the ZEE5 News section.