Shukranu Review: Divyenndu Shines In This Tasteful Film About A Tricky Subject 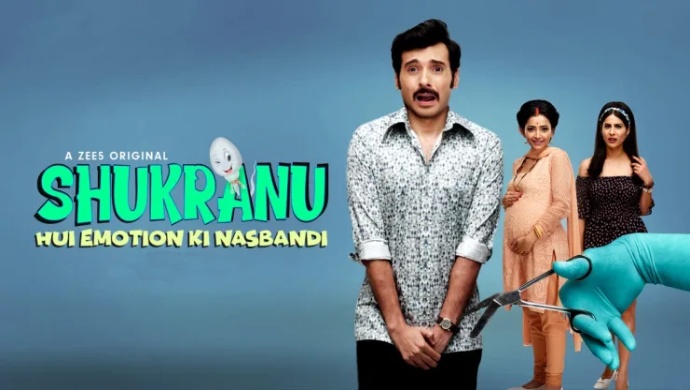 You could describe Shukranu as a romantic comedy, but it is more than that. You could call it a social drama and you would still be wrong. Shukranu is not your regular romantic watch on Valentine’s Day, but then again the film is also set during what’s termed as a ‘dark period in Indian history’. Shukranu is a story of love in the time of emergency. Divyenndu, Shweta Basu Prasad and Sheetal Thakur star in this latest ZEE5 Original movie based on the forced sterilisations during the emergency ere, along with a crew of quirky characters.

Watch the trailer of Shukranu here.

The story of Shukranu focuses on Inder (Divyenndu) a man working as a chief supervisor at a factory in Delhi during the emergency. He falls in love with a girl Akriti (Sheetal Thakur). But, he goes back to his village to marry the girl his parents choose for him, Reema (Shweta Basu Prasad). Things go wrong for Inder when two days before his marriage he is forcefully taken into a sterilization centre and made to get a vasectomy. Inder tells no one about this but his marriage gets off too an awkward start. Inder realises that he can still have sex but he is surprised when he finds out Reema is pregnant. To make matters worse, Akriti also wants to marry Inder without realising that he is already married. Inder decides to be with Akriti because he is sure that Reema has already cheated on him with someone else.

This film is set in the 70’s but is relevant today simply because it is a topic that has not been explored. This movie takes a fresh perspective on a dark chapter of Indian democracy. We’ve seen some great social comedy dramas in these past few years and Shukranu is right up there with films like Shubh Mangal Savdhan. The film shows the brutal side of the forced sterilizations and softens it with one of the unique love triangles we have seen in Indian Cinema.

Divyenndu is present in almost every scene of the movie and he holds your attention. This also makes the story hyper-personal about one man out of the thousands who were affected by this program. Sheetal Thakur and Shweta Basu Prasad play Divyenndu’s love interests but they portray the two contrasts to perfection. Sheetal plays the role of Akriti a city girl from Delhi who dresses the way she wants and is the fascination of all the men who see her, but she is confident of herself. Shweta Basu Prasad plays the role of a demure village girl who everyone assumes to be simple-minded but is actually quite intelligent.

At no point of the story are you not fully invested in finding out how this love triangle pans out. The fact that both women are in love with a sterilized man only adds another layer to the story. The families are a source of comedy and also acts as a mirror for audiences reactions to Divyenndu’s vasectomy and other troubling decisions.

This movie dispels a lot of myths and shatters more than a few norms. It first shows Divyenndu looking for unconventional ways to improve his sex life after marriage. This includes a funny montage of eating drumsticks, grinding rhinoceros horns and tiger penis among other such unqualified opinions by people. It shows him consulting an actual doctor who informs him that he can still have a healthy sex life after being sterilized, except, he should not expect any kids.

Shukranu challenges the stigma around male vulnerability. Men were not able to talk about what they were put through because everyone treated it as a joke and ridiculed them. The comedy is good because it comes naturally from the situations: Men who were forced to accept their situation and dealt with their pain using jokes. Wives who awkwardly try to make the first move because their husbands were distant from them suddenly. Families who had never encountered such problems before.

Shukranu presents facts and data about the forced sterlisations without taking away from the story.  It reveals that doctors were doing around 100 sterilisations a day. No one was held accountable for the forced operations and the people who died during it. It also shows how the rich and powerful  found a way to reverse their operations while the poor were forced to accept the 200 rupee compensation along with a tub of ghee and an alarm clock.

The whole film is set in the 70s and everything from the costumes to the props to the posters on the walls and ads on the streets are all picked right from the 70s and maintain the illusion. The highlight of the story is it’s ability to shift effortlessly between comedy, romance and drama. It is most evident in the final scene which is superbly written.

Watch this movie for a well-written story that tackles a sensitive subject in a relatable (and enjoyable) way. Also catch all episodes of Never Kiss Your Best Friend, a romantic comedy starring Nakuul Mehta and Anya Singh, on ZEE5.