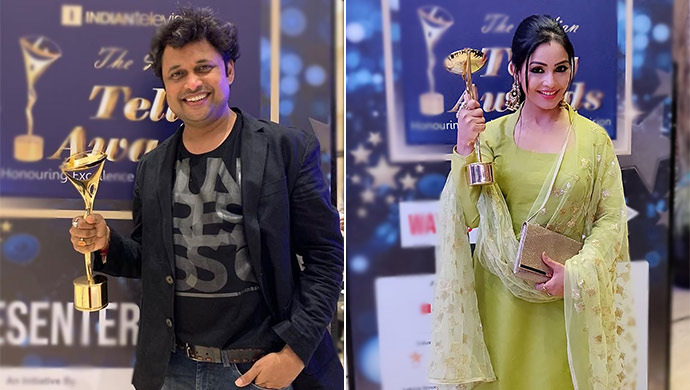 Bhabi Ji Ghar Par Hain is known as the best comedy show for its unique concept and creative plot. Be it Angoori’s naive nature or Saxena’s sarcastic personality, every character in the show has become a household name now. We love how the characters are placed in the show and their dialogues are quite popular amongst their fans.

You might be thinking why are we telling you about a show which is known as the best comedy show from the last four years. Lets us reveal it to you, the cast of Bhabi Ji Ghar Par Hain has yet again won many awards. ZEE5 Indian Telly Awards held on 20th March 2019 saw actors Yogesh Tripathi and Shubhangi Atre awarded for the best comic role male and female.

Have a look at the pictures shared by the celebs on their Instagram:

The smile on their face truly expresses their happiness as it is their dedication and hard work which speaks for them. As soon as the awards were declared, the whole team of Bhabi Ji Ghar Par Hain was in for a celebration. Speaking about the awards, Shubhangi Atre received the award for her character of Angoori Bhabi as the Best Actor in a Comic Role Female (Jury). Also, the corrupt daroga Happu Singh played by Yogesh Tripathi bagged an award for the Best Actor in a Comic Role Male (Fans Choice).

Especially for Yogesh, this year has been a lucky one as it marked his appearance in the lead role of Happu Ki Ultan Paltan which is a spin-off of Bhabi Ji Ghar Par Hain. The new show is doing very well and the cast and crew celebrated the same by cutting a cake.

Watch The Entertaining Movie Starring Ranveer Singh In And As Simmba